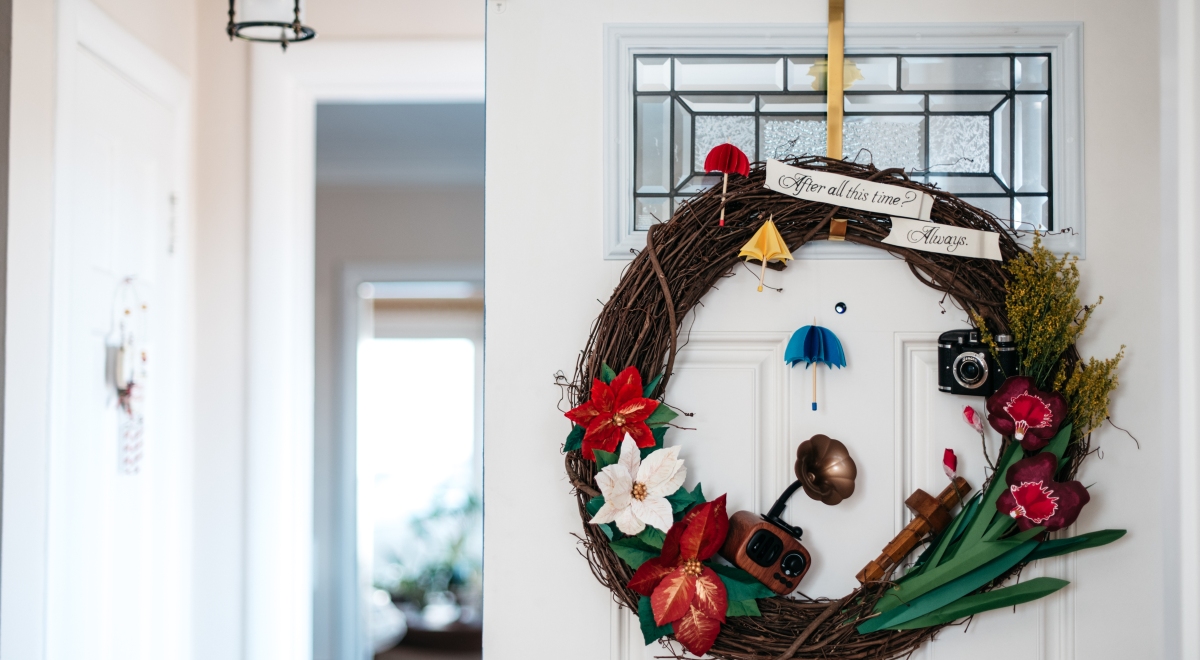 Ok I have to take a moment to share this incredible gift that Javier gave me for our 10-year anniversary. It’s been hanging in our house for a week and I still have to stare at it every time I pass! It’s a handmade wreath with meaningful mementos from our lives as individuals and together placed throughout. Isn’t it amazing??

Javier’s crafty, creative friend Jessie makes these wreaths for fun and when Javi saw her working on one on instagram he asked her if she’d make one for our 10-year anniversary (10 YEARS CAN YOU BELIEVE IT!?). They’ve been working on this together for three months now, with Javier sending her ideas and Jessie executing them to perfection.

Starting at the top, the wreath has one of my favorite Harry Potter quotes – it’s from the scene in the 7th book when Dumbledore asks Snape “after all this time?” (meaning, even after Lily has been dead for 17 years you still love her?) and Snape responds “always” – it just melts my heart. Snape is such a softy deep down. ANYWAY…

Moving to the right you see a camera (of course!!) to represent my photography. Just next to the camera are beautiful paper orchids and dried Golden Rod, which represent Penelope and Goldie. The orchid is for Penny, because that’s the specific orchid (also known as Effie Trinket in our house) that opened up on Penny’s actual birthday back in 2017! The Golden Rod is for Goldie…she’s named Golden Rodriguez after the official state flower of Kentucky. Coincidentally, these are my next two tattoos!

Swing down to the bottom and you can see a small woodworking tool, obviously for Javier! His woodworking has become a major part of our lives here in Louisville – there isn’t a single room in our house that doesn’t have a Javier original now. And he’s been messing with woodworking since Nashville…remember these doghouses he made?!?

Next to the woodworking tool is a gramophone with a bluetooth speaker inside – of course music has to show up!! When Javi first showed me the wreath he had it playing “Danny’s Song” which was our first dance. And of course I was crying listening to the song and looking at all the beautiful details on the wreath. The gramophone is attached with velcro so we can take it off and charge it if we need to – brilliant!

Moving on up the left side are intricate paper poinsettias – our only florals at the wedding. My bouquet was made of poinsettias, and all of the decor at the church was poinsettias (bonus to getting married at Christmas!). LOVE!

The last little piece up at the top are three umbrellas – a red, yellow and blue one. If you’re friends with me on facebook, you may have seen this little video I posted back in September of a song I wrote about Penny’s love for umbrellas. At the time we had a red, yellow, and blue umbrella in our house…the only surviving one is the blue one and it has about 6 holes in it because Penny drags it all over the ground outside. But that girl is OBSESSED with coloring umbrellas (we draw them for her) and carrying real ones around, even on a bright sunny day. That song became a favorite of hers too…I recorded a quick version of it in my dad’s studio for her and it was on heavy rotation in the car for a couple of weeks (right now it’s Santa Claus is coming to town SPECIFICALLY by Jordan Smith – no other version will do).

Isn’t this the most beautiful gift? We have it hanging on the inside of our front door so that it isn’t exposed to the elements and we get to see it every time we pass. Penny now says goodmorning and goodnight to the umbrellas on the wreath every time we bring her downstairs or take her upstairs and pass the front door (this is another routine of ours – she says goodmorning and goodnight to all of her favorite things). THANK YOU JAVIER for such a thoughtful, beautiful commemoration of 10 of the happiest years of my life, and a huge thank you to Jessie for all of your hard work making this beautiful work of art that we will cherish forever!!